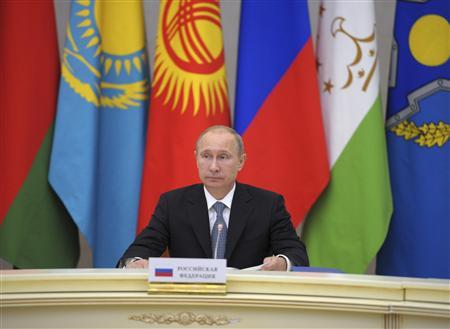 Russia, which has a large Muslim minority of its own and is fighting an Islamist insurgency, has accused the West of helping militants by seeking Syrian President Bashar al-Assad’s removal without paying enough attention to the potential consequences. Putin told leaders of the six-nation Collective Security Treaty Organisation (CSTO) that militants fighting Assad could eventually expand attacks beyond Syria and the Middle East. “The militant groups (in Syria) did not come out of nowhere, and they will not vanish into thin air,” Putin said. “The problem of terrorism spilling from one country to another is absolutely real and could directly affect the interests of any one of our countries,” he said, citing the deadly attack on a shopping mall in Nairobi as an example. “We are now witnessing a terrible tragedy unfold in Kenya. The militants came from another country, as far as we can judge, and are committing horrendous, bloody crimes,” Putin said at a CSTO summit in the Russian Black Sea resort city of Sochi. His words appeared to be a warning about violence spreading from both Syria and Afghanistan, which shares a long border with CSTO member Tajikistan in Central Asia. BORDER ASSISTANCE Reiterating concerns violence could spread to former Soviet Central Asia and Russia after the pullout of most foreign combat troops from Afghanistan by the end of 2014, he said CSTO nations agreed to draft a plan to protect the border. “We will provide additional collective assistance to Tajikistan to strengthen the Tajik-Afghan state border,” Putin said. He gave no details. Russian border guards used to patrol the Tajik frontier with Afghanistan but left in 2005. The CSTO security alliance also includes Kazakhstan, Kyrgyzstan, Armenia and Belarus.

“I respect the LGBT community full heartedly, but I implore the world not to boycott the Olympic Games because of Russias stance on LGBT rights or lack thereof.” Click here for the full story. Lady Gaga “The Russian government is criminal,” the Mother Monster tweeted in August. “Oppression will be met with revolution. Russian LGBTs you are not alone. We will fight for your freedom.” She also noted: “Sending bravery to LGBTs in Russia. The rise in government abuse is archaic. Hosing teenagers with pepper spray? Beatings? Mother Russia?” Click here for the full story. Blake Skjellerup The New Zealand speed skater, who is openly gay, told HuffPost Live’s Josh Zepps that a boycott would hurt the athletes themselves more than Russia. “I don’t support a boycott at all,” he said.

24, 2013: Greenpeace ship “Arctic Sunrise” is escorted by a Russian coast guard boat, in Kola Bay at the military base Severomorsk on the Kola peninsula in Russia, at dawn. Russia has filed piracy charges against Greenpeace activists who tried to board an offshore drilling platform in the Arctic owned by state-controlled natural gas company Gazprom.AP MURMANSK, Russia Russian investigators said Tuesday that they will file piracy charges against Greenpeace activists who tried to climb onto an offshore drilling platform in the Arctic owned by the state-controlled gas company Gazprom. The activists are on a Greenpeace ship, the Arctic Sunrise, that was seized last week by the Russian Coast Guard and towed Tuesday into a port near Murmansk. It was unclear how many of the 30 activists from 18 countries face piracy charges, which carry a potential prison sentence of up to 15 years and a fine of 500,000 rubles (about $15,500). The Investigative Committee, Russia’s federal investigative agency, said it would question all those who participated in the protest and detain the “more active” among them. Two activists tried to climb onto the Prirazlomnaya platform on Thursday and others assisted from small inflatable boats. The Greenpeace protest was aimed at calling attention to the environmental risks of drilling for oil in Arctic waters. “When a foreign vessel full of electronic technical equipment of unknown purpose and a group of people calling themselves members of an environmental rights organization try nothing less than to take a drilling platform by storm, logical doubts arise about their intentions,” Investigative Committee spokesman Vladimir Markin said in a statement. He said the activists posed a danger to the work of the oil platform. “Such activities not only infringe on the sovereignty of a state, but might pose a threat to the environmental security of the whole region,” Markin said. Greenpeace insists that Russia had no right under international law to board its ship. One activist told The Associated Press that the Coast Guard officers hit and kicked some activists when they stormed the vessel.